See the leaf 'Anglish Spelling' for the latest in historically grounded Anglish spelling reform, as settled upon by the fellowship. This is a showcase and index of other spelling proposals which have not been fully accepted by the wider community. 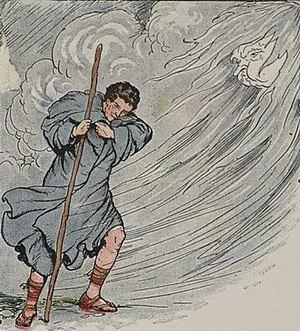 The wind seeks to strip the wayfarer of his shroud, drawn by Milo Winter in a 1919 Æsop anthology.

The following is an Anglish translation of 'The North Wind and the Sun.' Grounded on the English language version published in the 1999 IPA Handbook, and translated into Anglish by users on the Anglish Discord.

This spelling prioritizes pronounceability over recognizability. Not all spellings are grounded in historical conventions and are instead grounded in what Carl thinks looks good. This form is mainly intended for personal use by Carl. Further reading at Simplified New English Spelling.

A snippet from "To Build a Fire", by Jack London:

Edwin Spelling is an alternate spelling for English with the goal to create a more native English variant of the current system. However, Edwin-spelling is an independent effort and is more influenced by its creator's personal taste in spelling than Hurlebatte's Anglish Spelling. Spelling is primarily etymological, and ignores post-ME vowel changes, as Modern English: ⟨oan⟩/⟨åne⟩ /wʌn/, ⟨cude⟩ /kʊd/, ⟨rume⟩ /ruːm/. There are two forms, roughly: one which is mostly akin in appearance to Modern English, and one which goes much further and adds many Old- and Early-Middle English style spellings. The original divergence between Hurlebatte's spelling and Edwin-spelling had to do with the spelling of English ⟨nowiki⟩/uː/⟨/nowiki⟩ and /iː/, from Old English ē and ō; while the former mostly leaves them intact, Edwin-Spelling puts them in the V_e "magic E" set of vowels. See Edwin Spelling for further reading.

Example: (from this wiki's translation of the Gospel of John)

And the Word was made flesh, and dwelt among us, (and we beheld his wolder, the wolder as of the oanly begotten of the Father), estey and trewthful. John bare witness of him, and rard, saying: This was he of whome I spake, He that cummeth after me is my better: for he was before me. And of his fullness haf all we reaped, and este for este.

The following are a set of anti-French changes which might make things a bit too unreadable, but are cool nonetheless. Writing with all these would be "deepest" Edwin spelling. Considerations will be made about what to do about OE "g"

And þe Word was made flæsc, and dwelt among us, (and we beheld his wolder, the wolder as of þe ånely begotten of þe Faþer), estey and trewþful. John bare witness of him, and rard, saying: Ðiss was he of whome I spake, He þat cummeþ after me is my better: for he was before me. And of his fullness haf all we ræped, and este for este.

This is an Anglish spelling reform that I hope will get wide use. I strongly disagree with the philosophy of zero use of innovation used by Yose and Hurlebatte. The cherrypicked revivals result in a highly anachronistic system because of the combination of various conventions only used at different points in time, with many artificially archaic aspects combined with newer systems that almost certainly would have been replaced by another native system without foreign influence. It is also highly asymmetrical in how differently unvoiced and voiced velars/palatals are treated, which is very displeasing to the eye. As such, I add in a small number of innovations to create a highly elegant symmetrical system. Nevertheless, it is fairly similar to Hurlebatte's and Edwin's systems. A variant I find interesting is replacing ee with é_e and oo with ó_e (or e_e and o_e, with ea and oa becoming æ_e/ä_e and å_e instead). See Frith's Plot for an Anglish Spelling for further reading. I intensely hate the current official Anglish spelling, and its adoption me to stop participating in this community for the most part.

This spelling spears and spurs for one thing,
thawing English from its thimble of frost.
To flower, English is to free itself from that fright;
Away with the 'weird E', woe to the spelling not matching speech.
Should you brook it, on the Discord is shown the link in #links-only.
Have fun reading! (see also here!)

A snippet from "To Build a Fire", by Jack London:

Dey had browken cowld and grey, dredfully cowld and grey, when the man went asyd from the mein Yookon bywey and clym’d the hy erth-stath, whear a dim and littel-trodden bywey led eestwerd thro the far evergreen timmerland. It was a steep stath, and he stopt fer breth at the top, spearing the deed ta himself by louking at his watch. It was nyn. Thear was now sun noar hint of sun, thow thear was not a clawd in the hevens. It was a howder dey, and yet thear loukt a shadowy shrawd owver the syt of things, a slyt gloom that meid the dey dark, and that was ow'd ta the derth of sun. This trooth did not wurry the man. He was at howm with the lack of sun. It had been days sins he had seen the sun, and he new that a few moar deys must gow by befoar that blyth boall, bearing sawth, woud but peep abuf the awtlyn and dip forthwith from syt.

Wordwork has sought steadiness, wordlore, and prettiness in their spellings. It is for fun, and not meant to be an earnest reform. It's built upon Anglish Spelling, with some twists. See Wordwork's User Leaf for an outline on the spelling eas.

Retrieved from "https://wiki.anglish.info/w/index.php?title=Alternative_Spelling_Proposals&oldid=7761"
Cookies help us deliver our services. By using our services, you agree to our use of cookies.