From The Anglish Wiki
Jump to navigation Jump to search

This is an Anglish wending of the folk tale, Tom Tit Tot, first written by Edward Clodd for Folk-Lore (vol. vii), and later gathered together in English Fairy Tales by Joseph Jacobs, and English Fairy and Other Folk Tales by Edwin Sidney Hartland. The tale is akin to Rumpelstiltskin as written by The Brothers Grimm.

This reading is set mostly on Jacobs's reading in which he did away with some of the Suffolk slang words. Went by Wordwork. See the wender's leaf for more on the wordings.

Once upon a time there was a woman, and she baked five bakes. And when hy came out of the oven, hy were that overbaked the rinds were too hard to eat. So, she says to her daughter:

'Darter,' says she, 'put thou hem there bakes on the shelf, an leave 'em there a little, and hy'll come eft.' – She meant, thou knowst, the rind would become soft.

But the maiden, she says to herself: 'Well, if hy'll come eft, I'll eat 'em now.' And she set to work and ate 'em all, first and last.

The maiden went and she looked, and there was nothing but the dishes. So back she came and says she: 'Noo, hy ain't come eft.'

'Well, come eft, or not come eft,' said the woman, 'I'll have one for evening meal.'

Well, the woman she was done, and she numb her spinning to the door to spin, and as she span she sang:

The king was coming down the street, and he heard her sing, but what she sang he couldn't hear, so he stopped and said:

'What was that thou wert singing, my good woman?'

The woman was ashamed to let him hear what her daughter had been doing, so she sang, instead of that:

'All right,' says the woman; for she thought what a great wedding that was. And as for the five leas, when the time came, there'd be wealth of ways of slipping out of it, and liefliest, he'd have forgotten all about it.

But when the time was coming over, she began to think about the leas and to wonder if he had 'em in mind. But not one word did he say about 'em, and she thought he'd wholly forgotten 'em.

However, the last day of the last month he nimbs her to a room she'd never set eyes on before. There was nothing in it but a spinning-wheel and a stool. And says he: 'Now, my dear, here thou'll bist shut in tomorrow with some eats and some flax, and if thou hasn't spun five leas by the night, thy head'll go off.'

And away he went about his business.

Well, she was that frightened, she'd always been such a gatless maiden, that she didn't so much as know how to spin, and what was she to do tomorrow with no one to come nigh her to help her? She sate down on a stool in the kitchen, and word! how she did weep!

However, shortly she heard a kind of a knocking low down on the door. She upped and oped it, and what should she see but a small little black thing with a long tail. That looked up at her right wily, and that said:

'What bist thee a-weeping for?'

'Never thee mind,' that said, 'but tell me what thou’st a-weeping for.'

'Thou don't know that,' that said, and twirled that's tail 'bout.

'Well,' says she, 'that shan’t do no harm, if that don't do no good,' and she upped and told about the bakes, and the leas, and everything. 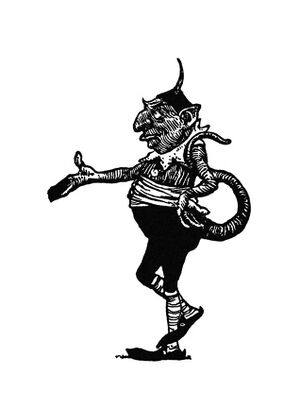 'This is what I'll do,' says the little black thing. 'I'll come to thy eyedoor every morning and nimb the flax and bring it spun at night.'

That looked out of the edge of that's eyes, and that said:

'I'll yield thee three guesses every night to guess my name, and if thou hasn't guessed it before the month's up thou shall be mine.'

Well, she thought, she'd be set to guess that's name before the month was up. 'All right,' says she, 'I swear.'

'All right,' that says, and word! how that twirled that's tail.

Well, the next day, her were numb her into the room, and there was the flax and the day's food.

'Now, there's the flax,' says he, 'and if that ain't spun up this night, off goes thy head.' And then he went out and locked the door.

He'd hardly gone, when there was a knocking upon the eyedoor.

She upped and she oped it, and there well enough was the little old thing sitting on the ledge.

'Here it be,' says she. And she yielded it to him.

Well, come the evening a knocking came eft to the eyedoor. She upped and she oped it, and there was the little old thing with five leas of flax on his arm.

'Noo, that ain't,' says he, and he twirled his tail harder, and away he flew.

Well, when her were came in, there were the five leas ready for him. 'I see I shan't have to kill thee tonight, my dear,' says he; 'thou’lt have thy food and thy flax in the morning,' says he, and away he goes.

Well, every day the flax and the food were brought, and every day that there little black imp would come mornings and evenings. And all the day the maiden sate seeking to think of names to say to it when it came at night. But she never hit on the right one. And as it drew towards the end of the month, the imp began to look so hateful, and that twirled that's tail faster and faster each time she yielded a guess.

At last it came to the last day but one. The imp came at night along with the five leas, and that said:

'Is that Nicodemus?' says she.

'Is that Sammle?' says she.

'A-well, is that Methusalem?' says she.

Then that looks at her with that's eyes lich a coal of fire, and that says: 'Woman, there's only tomorrow night, and then thou’st be mine!' And away it flew.

Well, she felt that dreadful. However, she heard the king coming along the hall. In he came, and when he sees the five leas, he says, says he:

'Well, my dear,' says he. 'I don't see but what thou’lt have thy leas ready tomorrow night as well, and as I reckon I shan't have to kill thee, I'll have evening meal in here tonight.' So hy brought food, and another stool for him, and down the two sate.

Well, he hadn't eaten but a mouthful or so, when he stops and begins to laugh. 'What is it?' says she.

'A-why,' says he, 'I was out a-hunting today, and I came away to a spot in the wood I'd never seen before. And there was an old chalk-pit. And I heard a kind of a lich of humming. So, I came off my horse, and I went right hush to the pit, and I looked down. Well, what should there be but the funniest little black thing thou ever set eyes on. And what was that doing, but that had a little spinning-wheel, and that was spinning wonderful fast, and twirling that's tail. And as that span that sang:

Well, when the maiden heard this, she felt as if she could have leapt out of her hide for glee, but she didn't say a word.

Next day that there little thing looked so hateful when he came for the flax. And when night came she heard that knocking upon the eyedoor sheets. She oped the eyedoor, and that come right in on the ledge. That was grinning from ear to ear, and Oo! that's tail was twirling 'bout so fast.

'What's my name?' that says, as that yielded her the leas.

'Is that Solomon?' she says, letting on to be afeard.

'Noo, 'tain't,' that says, and that came further into the room.

'Well, is that Zebedee?' says she eft.

'Noo, 'tain't,' says the imp. And then that laughed and twirled that's tail till thou couldn't hardly see it.

'Nimb time, woman,' that says; 'next guess, and thou’st mine.' And that stretched out that's black hands at her. Well, she backed a step or two, and she looked at it, and then she laughed out, and says she, wising her finger at it:

Well, when that heard her, that yielded a frightful howl and away that flew into the dark, and she never saw it any more.

Ones upon a time there was a woman, and sce baked fife bakes. And hwen hy came ute of the ofen, hy were that oferbaked the rinds were too hard to eat. So, sce says to her daugter:

Retrieved from "https://wiki.anglish.info/w/index.php?title=Tom_Tit_Tot&oldid=6223"
Cookies help us deliver our services. By using our services, you agree to our use of cookies.